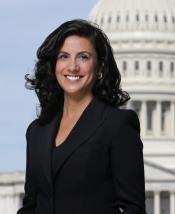 Ms. Majida Mourad is Senior Vice President of Government Relations at Tellurian Inc., a Liquified Natural Gas (LNG) company. She previously served as Vice President of Government Relations at Cheniere Energy and was instrumental in the company receiving the first US LNG export permit in the “lower 48”. Prior to Cheniere, Ms. Mourad was the President of Abraham & Roetzel LLC, and a Partner of The Abraham Group LLC, a strategic consulting firm focused on the international energy sector with the former Secretary of Energy, Spencer Abraham

From January 2001 until February 2005, Ms. Mourad served as Senior Advisor to the Secretary of Energy, focusing on the United States Department of Energy international relations efforts. In this role, Ms. Mourad traveled extensively around the globe on behalf of the Department to the North American Initiative, the G8 Energy Ministerial Conferences, the Western Hemispheric and US-African Energy Ministerial Conferences as well as numerous other initiatives. She also served as one of the Department’s senior officials for the Liquefied Natural Gas Summit, the International Partnership for a Hydrogen Economy and the Carbon Sequestration Leadership Forum.

Ms. Mourad began her career on the Hill first working for Congressman Sonny Bono and then his successor, Congresswoman Mary Bono. She then transitioned to the Senate serving for then Senator Spencer Abraham.

Ms. Mourad is a member of the Board of the United States Energy Association as well as the National Energy Resources Organization. She also serves on the board of several nonprofit organizations, including the Board of Governors for the Ford’s Theater Society, the Advisory Board for the Association of Former Members of Congress and a board Member of the Ohio Governor’s Imagination Library.