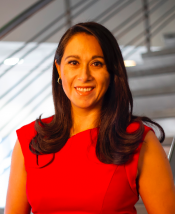 Prior to joining AES, she served as Regulatory Affairs Manager of Enel Generation Chile, with a 7,000 MW portfolio. Previously, she worked at Enel Green Power Chile, Peru and Colombia, where she oversaw the Regulation and Stakeholder Management, and she performed as Transmission and Connections Deputy Manager for that region.

She worked for 3 years at the Chilean Grid Operator of the North System of Chile, as Advisor to the Executive Director, as Head of the Technical and Regulatory Management Area, and also as Secretary of the Board.

Paola also has experience in the public sector. She began her professional career in the Electrical Department of the National Commission of Energy, of the Ministry of Energy.

Throughout her career, Paola has actively participated in the Chilean Energy Transition, both in the materialization of the first 1,200 MW of large renewable energy plants in Chile and another 340 MW in Peru, as well as boost the development and growth of the transmission system required by the Chilean and Colombian electrical systems, in order to enable the growing penetration of wind and solar energy from areas with high availability of renewable resources.

On the other hand, she has worked proactively in the regulatory adaptation to incorporate new technologies, at the legislative, regulatory, normative and technical levels. Currently, she promotes and collaborates with initiatives that seek to include energy storage systems in the electricity markets of Chile and Colombia, as a driver for the diversification of energy matrices, and as a tool for making the operation of electrical systems more flexible, and the most important goal to reach the early decarbonization of the chilean electrical sector.

She is a Civil Electrical Engineer with a Master’s Degree in Industrial Engineering (c) from the Pontificia Universidad Católica de Valparaíso.