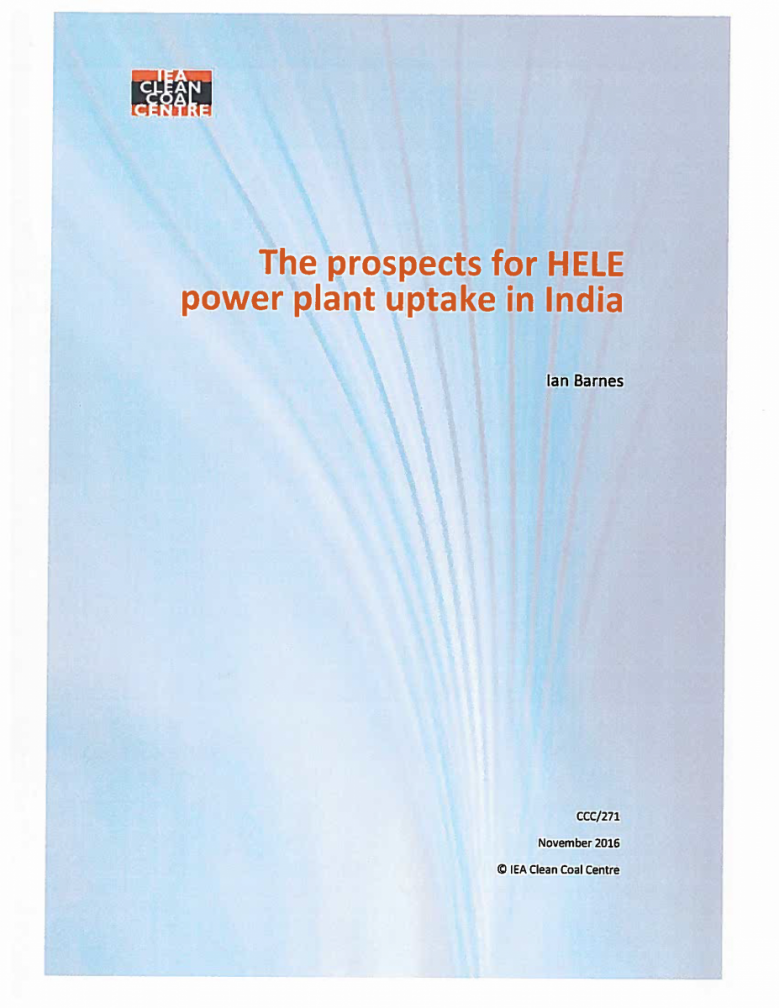 The prospects for HELE power plant uptake in India CCC 271

A recent study by the IEA Clean Coal Centre examined the role of HELE coal-fired power plant in helping to
meet the goal of reduced carbon dioxide emissions by setting out an overview of the prospects for the role
of HELE technologies in a number of major coal-user countries. Ten countries were studied: Australia,
China, Germany, India, Japan, Poland, Russia, South Africa, South Korea and the USA.
The study concluded that there are likely to be significant gains to be had from adopting a HELE pathway
and a deeper analysis of the Indian situation was warranted. This report presents the results of that
analysis.
India’s coal fleet is relatively young, predominantly subcritical but with a large tranche of future capacity
planned or under construction. However, the future capacity that is planned is largely supercritical, rather
than the current state-of-the-art ultrasupercritical technology that has been extensively proven in other
countries. Indian projections and current policy seem to indicate that this trend will continue in the near
future. This would seem to be a missed opportunity for India to ensure that she has the most efficient and
modern plant to drive her economic growth; lower efficiency plant built in preference to the best HELE
alternatives now would be ‘locked in’ to the generating sector for the lifetime of that plant, which could be
as long as forty years.

The choice of subcritical, and now supercritical plant, over more advanced options is attributed to a
cautious and conservative approach, gathering ‘home grown’ experience on plant performance and
maintenance in the light of challenges posed by India’s high ash coal resource. While this was undoubtedly
a reasonable approach where power generation technologies were developed and built using regional
skills and facilities, in the modern globalised power market significant experience exists in dealing with a
wide range of coal types and manufacturers are prepared to design and offer high performance plant to
burn even the most difficult coals, with full commercial guarantees. Fortunately, recent developments show
that the Indian market is becoming more receptive to ultrasupercritical as the technology of first choice,
and the recent initiative on AUSC development is promising, but there is still much to be done to avoid the
Indian coal fleet becoming locked into mainly supercritical plant.