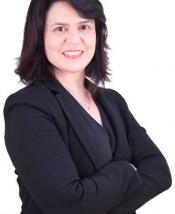 Angela Livino is the Director of Corporate Management Division at the Brazilian Energy Research Office (EPE in its Portuguese acronym). EPE aims at supporting the Brazilian Ministry of Mines and Energy’s (MME) energy policies with studies and research on energy planning covering electricity, oil, natural gas and its derivatives and biofuels. EPE studies cover the areas of engineering, economics, modeling, policy and environment and where they overlap.

Livino works at EPE since 2005, running studies in generation planning, hydropower inventory potential, electricity auctions and multiple discussions to improve the Brazilian energy system to ongoing changes in the nation's resource mix due to the growth of renewables.

Prior to EPE, she was a senior engineer from 2001 to 2005 at the Brazilian Power System Operator (ONS in its Portuguese acronym). ONS is the independent, not-for-profit organization that plans and operates the power system.

From 1997 to 2001 she worked as a researcher at CEPEL (Eletrobras Electricity Research Center) developing hydrological models.

She received a Master´s Degree (2001) and a PhD (2015) in water resources and environmental sciences from the Civil Engineering Program at the Federal University of Rio de Janeiro. During her PhD in 2013, she was a Giorgio Ruffolo Doctoral Fellow in Sustainability Science at Harvard Kennedy School, holding a Fulbright Scholarship.

"My career has been a mix between academic development and practical experience. I graduated as a civil engineer in 1998 and immediately entered a Master's degree course, both at the Federal University of Rio Janeiro. I was focused on water resources and considering that I was working at an Energy Research Center at that time and my work was related to hydropower plants, my dissertation was focused on the same subject. In 2001, I was hired by the Brazilian Electric System Operator to work as an Engineer at the midterm generation planning studies. In 2005, I was invited to join the very embryonal stage of the Energy Research Office (EPE) as an Advisor at the generation planning studies and it was an excellent opportunity to learn more about energy auctions and development of renewable energy sources. In 2010, I decided to improve my academic background and started my Doctoral Course, still working at EPE at the same time. In 2012, I was approved for a Fulbright scholarship to spend one year as a doctoral fellow at Harvard Kennedy School, to join a Sustainable Science group. In 2015, I finished my Doctoral thesis. In 2013, I returned to EPE and since then I’ve been working in leadership positions. Last May, I joined the Executive Board of EPE."

"Yes, more recently I have witnessed some changes in the energy sector in Brazil. As an example, in 2020 we can already see women in high leadership positions at the Electricity Regulator and Oil and Gas Regulator Agencies, the same is occurring at the Chamber of Electric Energy Commercialization and at Energy Research Office (EPE)."

"EPE has continuously developed a culture of diversity and equality, as an example, in 2017 we installed an Internal Gender, Race and Diversity Committee to promote an equal environment at EPE in relation to gender, race and diversity, with a view to improving the quality of life and social relations at work in the Company. Both the Committee and the Executive Board of EPE promote programs, lectures and encourage courses and the culture of equality."

"Yes! We are so proud of our recent gender balance at the Executive Board. Prior to that we had a number of women as head of department (45% of total), as well as female Ombudsman, Chief of Staff and at some high-level advisor positions."

"Beyond the Internal Gender, Race and Diversity Committee installed at EPE, as an example, EPE encourages the participation of the women staff in some programs like Columbia Women’s Leadership Network in Brazil Program. However, we are still a work in progress when it comes to measuring and reporting gender diversity."

"Actions such as appointing women to leadership positions, having them to tell their story and give visibility for their successful careers, for example with more interviews covering subjects like that would certainly inspire other women and men and reduce room for narrow minded perspectives and attitudes towards women leadership.

In addition, some initiatives like “Sim, elas existem”, or “Yes, they exist”, a grassroots movement founded to demonstrate that women professionals in the energy sector do exist and are well trained and competent. In 2018, to ensure these women are visible, this initiative built up a list with 163 names and the list was delivered to the transition team of the new government, to give them the opportunity to appoint women to leadership positions."