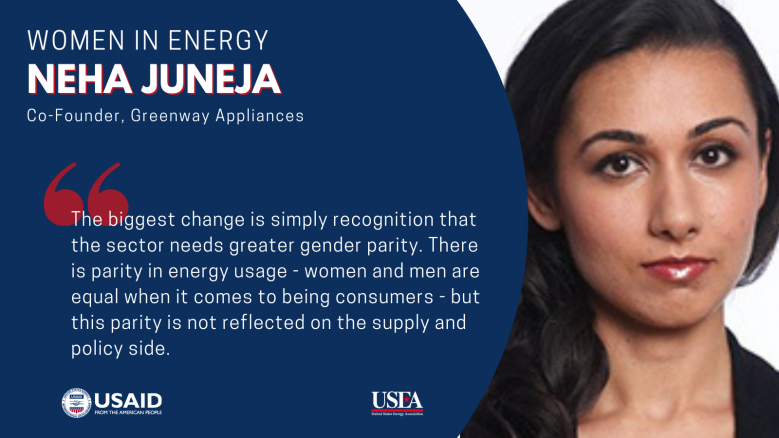 Every month we feature a woman who has shown exemplary leadership. The women highlighted come from diverse backgrounds and roles, and they bring with them a unique perspective to gender equality within the energy sector.

I would say so. I studied industrial engineering followed by an MBA and started up my first company right after, first founding Greenway Appliances, a clean cookstoves manufacturer and distributor and more recently IndiaP2P which creates investment products composed of business and energy loans extended primarily to women.  My career has been only businesses I have started-up and my formal education did provide a good basis as my work combines engineering and business.  However, actually doing leads to the best learning and the past decade of work has provided just that.

There is one thing that I wish I had learned more about but didn’t is the nexus between energy, development and climate change and perhaps also gender.  Energy is a necessary driver of everything around us.

My personal experience has been good as far as education goes without discounting the fact that there is indeed lack of gender balance across engineering streams. This is compounded by the fact that most industrial and engineering jobs are seen as ‘not for women’ which exacerbates the situation. The lack of examples and role-models makes it harder for women to imagine a future in these sectors and I would say that it was not very different for me.

Both of my companies selectively focus on women as consumers  - one catering to cooking energy needs and cooking continues to be a highly gendered activity and the other financing women borrowers to expand their businesses or purchase household assets, which often happen to be energy assets.  Given this, it is extra critical for us to design our business practices and staff composition appropriately but it hasn’t been easy.  Given the distributed and often rural nature of work it has been hard to attract well-educated, often city based candidates both men and women but we have found success in identifying talented individuals from our consumer base and building their skills and along with growth of the organization. I’m happy that at Greenway we have over 600 women operations agents and at IndiaP2P, over 90% of our borrowers are women.

4. What changes in the sector at large do you think have launched more women into leadership positions?

The biggest change is simply recognition that the sector needs greater gender parity. There is parity in energy usage – women and men are equal when it comes to being consumers but this parity is not reflected on the supply and policy side.  There has been fairly widespread recognition of this disparity and that has led to both small and large actions/corrections.

5. What are some untapped actions the energy and electricity sector could focus on to accelerate change, increase diversity, and foster a better gender balance in the boardroom?

I think it’s very important for organizations of all types to publicly report gender diversity data and track progress therein.  It’s common for many organization types to be oblivious to lack of diversity internally in terms of hard numbers but sometimes feel satisfied by announcing certain programmes centered around women.