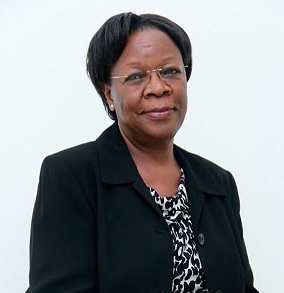 I hold a Bachelor of Science Honours degree in Electrical Engineering from Nairobi University - Kenya, and I am a registered engineer with the Uganda Engineers Registration Board (ERB), and also a member of the Uganda Institution of Professional Engineers (UIPE) where I served on the Executive Council for two years. Nairobi University was an unforgettable experience, and a giant step in my life, where I was one woman in a class of 40 engineering students and graduated in 1974 to become the first woman engineer in Uganda and probably in East Africa.

I was employed by Uganda Government, in the Department of Information for 28 years; and voluntarily retired from public service at the level of Commissioner for Uganda Television. In 1989, together with a few other women engineers and scientists we organised and founded the Association of Women Engineers Technicians and Scientists in Uganda (WETSU), whose mission is to promote girls’ and women's participation in engineering, scientific and technological education and work so as to enhance development and uplift the status of women.

After retiring from public service, I had an opportunity to serve as Ag. Executive Director of the Gender Advisory Board of the United Nations Commission on Science and Technology for Development (GAB/UNCSTD), for two and a half years.

In November 2013, I was appointed as a member of Uganda Electricity Generation Company Ltd. (UEGCL) Board, for a three years term, during which time I was the Chair for the Technical Committee.

In January 2017, I was appointed as Chairperson for the Board of Directors that provides oversight supervision to ensure continued performance improvement of Uganda Electricity Generation Company Ltd., whose mandate is to establish, acquire, maintain, and operate electricity generation facilities and to promote Research and Development in the electricity generation sector while running the Company on sound business principles.

I graduated from the University of Nairobi in 1974, with a Bachelor of Science, Honors degree, in Electrical Engineering; emerging as the first woman to attain an engineering degree in Uganda. My employment was mainly within Government, where I had the opportunity to train, acquire skills and gain experience in management and leadership. I am Registered Engineer and member of the Uganda Institution of Professional Engineers (UIPE) and served as a member of UIPE Executive Council for two years.

These changes have seen women take up leadership positions, where within the energy sector the top position is held by a woman Minister in charge of Energy and Mineral Development, and CEO of the Energy Regulatory Authority is also a woman. The seven member Board of Directors of UEGCL which I chair, has three women, representing 43% of the total Board membership. Additionally in the oil sector, the Boards of the Petroleum Authority of Uganda and the National Oil Company have about a 42% representation of women. This is a good indicator of positive change, but must be sustained and improved. Gender diversity and inclusion is a key aspect at UEGCL. The employment of women currently stands at 34% from about 25% in 2015. Within Top Management, 27% of the staff are women and all effort is being made to increase this percentage. The overall statistics of women managers against the male counter parts stands at 32%.

UEGCL is an equal opportunity employer as clearly enshrined its employment policies which include amongst others, recruitment, retention, Talent Management, and succession planning.

We aim to integrate these policies into our organization strategies, while we acknowledge that these policies are primarily aimed at all potential employees. We do understand that women have been slow in getting into this sector and we are sensitive to the fact that women have certain obligations and circumstances which require more support for them to thrive in the workplace. We are currently reviewing these policies to make provisions to attract and retain more women into the Company.

Our capacity development program is intended to bring out the best in our staff and enhance talent management at UEGCL. Women are given equal opportunity to enhance their careers through a variety of skills strengthening and leadership development training. Through these trainings, supported by mentorship and coaching, we hope to see more women at the top.

Without sounding vain, the three women on our Board of Directors bring a lot of valuable knowledge in engineering, economics, management and administration into the Company. We also currently have women heading the functions of Business Performance, Risk, as well as Human Resource and Administration. Additionally, we have a fairly good number of talented women at middle Management level who are potential successors at the top Management Level. UEGCL as a Company, puts a lot of emphasis on capability, regardless of gender.

From the perspective of the organization, judging by the increasing number of women in the organization are equal opportunity policies have been fairly effective. As a first step, it is important to encourage women to join the organization, it is from this pool of women that we can begin to mentor future leaders. Presently, we do measure gender diversity but we do not formally report on it.

As an organization, we have encouraged all our female engineers to register to become certified and professional engineers with the Uganda Institute of Professional Engineers (UIPE) and the Engineers Registration Board (ERB), and the Company has supported this cause through sponsorship for training as well as the registration process.

Article 21(I) of the Constitution of the Republic of Uganda provides overall legal framework for the Uganda Gender Policy, and Gender Mainstreaming is a Government framework initiative for redressing gender imbalances.

However, there is a need to strengthen and ensure the effectiveness of processes that advocates for Gender mainstreaming in the energy sector in line with the Uganda Gender Policy. This would be a conscious approach to take into account gender equality concerns in all policy, program, administrative and financial activities as well as organizational structures and procedures in the sector, to finally achieve the goal of gender equality within the organization including the boardroom.