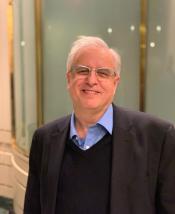 Steve Mitnick serves as editor-in-chief of Public Utilities Fortnightly and is president of its parent company Lines Up, Inc., based in Arlington, Virginia. He also authors the weekly digital magazine This Half Fortnight from PUF.

He previously served in the leadership teams of energy consulting practices at McKinsey & Co., Marsh & McLennan, and PHB/Hagler Bailly. Previously he served as president of the transmission developer Conjunction LLC, and chief energy advisor to the Governor of New York.

His book, Lines Down: How We Pay, Use, Value Grid Electricity Amid the Storm, was published in June 2013.

He has testified before utility regulatory commissions of six states, the District of Columbia, the Federal Energy Regulatory Commission, and in Canada. Early in his career, he served on the faculty of Georgetown University and taught undergraduate microeconomics, macroeconomics and statistics. He has an MBA from the Wharton School, University of Pennsylvania, and two BS degrees from Rensselaer Polytechnic Institute.