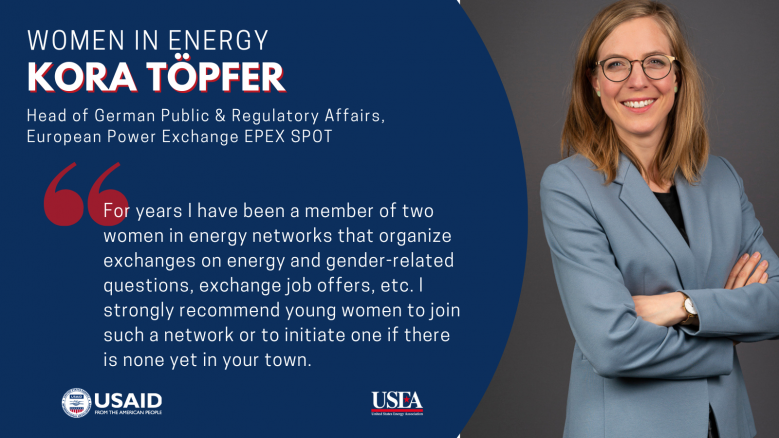 The Women in Energy series is a joint project between USEA and USAID to help improve the visibility of women's participation and leadership in the traditionally male-dominated energy sector and their active participation in policies and gender outcomes at their respective organizations.

Every month we feature a woman who has shown exemplary leadership. The women highlighted come from diverse backgrounds and roles, and they bring with them a unique perspective on gender equality within the energy sector. We believe that increasing women's leadership and participation in decision-making for climate policies needs active communications campaigns and championing that catalyze behavioral change and urgent action.

There are two things that have been driving me for a long time: the energy transition and the European integration. This is why, 17 years ago, I started studying political science with a focus on energy and environmental policy in 3 European countries: Germany, France and Great Britain. I was part of a study program of 20 German and 20 French students, and we switched every year between the German university in Münster and the French university in Lille. It was a truly European experience.

After graduation, I started working for several years in the German Ministry for Economic Affairs and Energy in Berlin with a focus on renewable energies. In terms of energy policy, those were very exciting times, and I learned a lot about how political decisions are made and can be shaped. It was the time just after the Fukushima nuclear disaster in 2011 which led to the decision in Germany to phase out nuclear power. About renewable energies, new concepts were developed on how these now more mature technologies can be best integrated into the market and how subsidy costs can be reduced.

Then, in 2016, I integrated the European Power Exchange EPEX SPOT at their headquarters in Paris. EPEX SPOT operates physical short-term electricity markets in 13 European countries and is committed to the creation of a pan-European power market. As Head of German Public & Regulatory Affairs, I work at the interface between business and public stakeholders. I find it highly motivating to work for a company that drives forward the European energy transition with concrete innovations. We will for example launch a completely new market for the trading of guarantees of origin for renewable electricity. Thereby we provide concrete benefits to renewable electricity producers.

There are many studies on the barriers for women to getting into leadership positions. From my point of view, it is not so much direct discrimination, but rather indirect discrimination based on stereotypes. For example, women are often seen as unsympathetic and dogged when negotiating salaries, unlike men. Or women are more often interrupted in meetings than men, even by women. Therefore, it is important to already educate children about equal treatment.

Language also has an important influence. For example, in job advertisements for management positions, phrases and words should appeal equally to male and female applicants.

As of 2020, EPEX SPOT publishes a gender equality index on its website. It stands at 90/100 for 2021. The index is based on 4 indicators: the pay gap between women and men, differences between pay rises of women and men, wage increases after maternity leave and gender repartition among the 10 most highly paid employees. The publication of this index does not directly increase gender equality, but it is an important tool to provide transparency and then enables informed and fact-based decisions to promote women. The publication of this gender equality index is a provision by French law with the aim to close the gender pay gap. As of 2022, companies with more than 250 employees who are non-compliant will be fined of up to 1% of their wage bill.

Certainly, there are still things to do at EPEX SPOT, e.g., to close the gender pay gap or to ensure that the number of women in the workforce is also proportionally reflected in the senior management. Nevertheless, I am proud to work for such a progressive company as EPEX SPOT which does a lot for gender equality. Working hours at EPEX SPOT are very flexible, which makes it easier to reconcile work and family life. We also have a human resources process for parents returning from parental leave to support a quick and smooth reintegration into the company. This is particularly relevant in our dynamic and fast-evolving sector of power trading. EPEX SPOT also fosters networking among women, amongst others with a regular Ladies Lunch.

4. What changes in the sector at large do you think have launched more women into leadership positions?

From my point of view, positive role models are part of it, i.e., women in leadership positions who in turn can inspire and motivate other women and who show that what she can do, I can do too. However, it is not sufficient to reach full gender equality if there is a woman in leadership positions here and there. A certain critical mass is necessary for a real cultural change. Such a change is not just an end in itself: research shows that gender equality within organizations improves corporate results and innovation.

5. What are some untapped actions the energy and electricity sector could focus on to accelerate change, increase diversity, and foster a better gender balance in the boardroom?

I am in favor of a quota for women in leadership positions. EU institutions currently negotiate a proposal that foresees that 40% of non-executive directors’ posts shall go to the under-represented sex. I welcome such proposals as it has been shown in the past that voluntary commitments by industry sectors do not deliver satisfying results. Further actions are the reduction of the gender pay gap, company programs to promote women for future leadership positions, and the state-led expansion of childcare.

6. What could be your one practical recommendation to mentor younger women pursuing a career in energy or climate action?

Do networking: I have always found networking with other women very inspiring and enriching. It allowed me to expand my professional network, but also to learn personally from the experiences of other women. For years I have been a member of two women in energy networks that organize exchanges on energy and gender-related questions, exchange job offers etc. I strongly recommend young women join such a network or initiate one if there is none yet in your town.

Choose a partner who has a similar view on gender equality when you build a family: This might look like a rather personal recommendation, but it can have a strong impact on your professional life. What do I mean by it?  As a mother of two wonderful sons aged one and three, I know from my own experience that there are days when a child cannot go to nursery or school, e.g., because the child is sick or because – and this is a very French reason – the nursery or school is closed due to a strike. I find it extremely important that I, as a woman, am not always the one who stays at home with the child in these situations, but that I take turns with my husband. I also think that it is important that men also take parental leave after the birth of the child and that it is not just up to women. It is a win-win situation for both: as a woman, I can return to my job sooner and as a man, I can build up my own relationship with the child during parental leave.