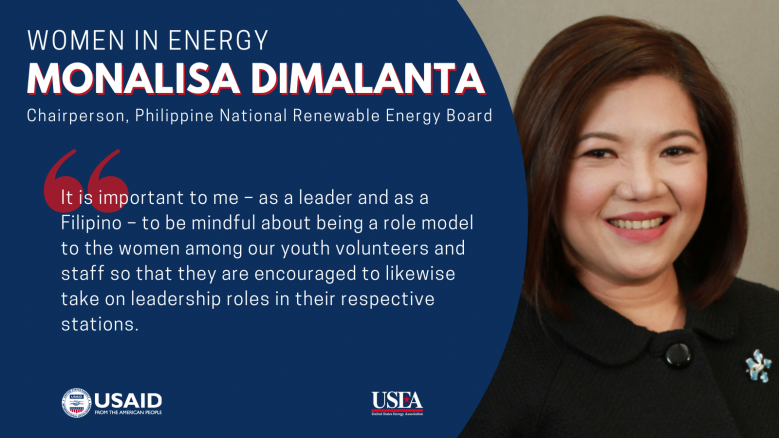 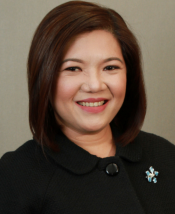 Monalisa presently holds various leadership positions in the government and private sectors. She is Chairperson of the Philippine National Renewable Energy Board (NREB) since her appointment by the Philippine President on 28 March 2019. In this post, she steers the performance by the Board in its mandate of monitoring the implementation of programs established under the Philippine Renewable Energy Act of 2008 or the RE Act (Republic Act No. 9513) and in formulating recommendations for new programs and policies to the Department of Energy (DOE) towards achieving the renewable energy targets of the country.

Monalisa is also a Senior Partner in PJS Law, a full-service law firm she joined in August 2001. Until her assumption of office as NREB Chair, she was leading the Energy Group of the Firm. While her government post permits continued practice of profession, it precludes her from representing clients in the energy space. Thus, she continues to support the Firm in the training of junior lawyers in practice and leads the Firm’s programs on innovation in legal services. One of such innovation projects has led to the creation of UNAWA Asia, an inclusive startup company formed as a result of collaboration between PJS Law and Talino Venture Labs SG. UNAWA provides digital solutions to medium, small and micro enterprises (MSMEs) for compliance with corporate and regulatory, including data privacy, requirements. Since the establishment of the company in November 2019, Monalisa sits as its President and CEO.

She is also a professor at the Ateneo de Manila Law School teaching Energy Law, Global Legal Practice, and Negotiable Instruments Law. This September 2020, she is also pursuing further studies as she enters the National University of Singapore (NUS) Lee Kuan Yew School of Public Policy for the Senior Fellowship Programme for Public Policy.

“I think my education could have led me anywhere, to be honest, and not necessarily this career in the energy sector that I have at the moment. It did provide for a good foundation for diverse career choices and allowed me to explore and pursue various interests that somehow find convergence in my life. For instance, I pursued Journalism in college where I learned investigation methods and refined my writing and communication skills. These proved to be quite useful in law school and in my legal practice, especially when I started exploring emerging fields of law, such when we in our Firm started the energy practice in the Philippines in 2001. My background in journalism allowed me to view and appreciate multiple and sometimes conflicting interests in the energy sector, and recognize patterns among interests, actions and consequences against the backdrop of law and history.”

“Absolutely! When I started out as an Associate in PJS Law in the emerging field of energy law in 2001, I would expect to be the only female in the room during meetings or negotiations: not the only female lawyer, mind you, but the only female in a room of male engineers, lawyers, bankers and accountants. Today, it is quite common (to the point that we often take it for granted, I think) to have female counterparts in negotiations or as heads of agencies or corporations in the energy sector – and these are women from diverse backgrounds as well (law, engineering, sciences and banking).”

“As an organization, a significant number of our Directors (at the NREB) are actually women (either as principals or alternate members of their respective agencies/organizations). I think having more women in the Board and leadership positions in the energy sector, on their own, attract more women to get involved in this industry transformation. We have programs that target the youth, in general, and encourage their increased participation in the efforts to promote renewable energy and address concerns regarding energy transition. It is important to me – as a leader and as a Filipino – to be mindful about being a role model to the women among our youth volunteers and staff so that they are encouraged to likewise take on leadership roles in their respective stations.”

“Yes, I think in general there are less formal or structural barriers within Philippine organizations in this regard. There remain though certain informal or social barriers that can be a hindrance to women advancing in their careers or taking on leadership positions. These informal barriers take the form of societal expectations on child-rearing or caregiver roles, for example, which still fall primarily on the women members of the family (not necessarily mothers alone). Talented women who have the opportunity to advance in their careers but at the same time also have the parenting or caregiving roles in their families often find themselves struggling and stressed.”

“To accelerate change, all decisions concerning energy should include the views of women. As aptly put by Dr. Angela Wilkinson of the World Energy Council, “energy is a story about humanity. It’s always been about peoples’ lives and society’s evolution…” Women comprise half of humanity’s population – it does not make any sense at all to exclude women in the exercise of finding solutions to the climate crisis, for example, when the risks are faced by all without distinction as to gender. Giving women a seat at the table in matters concerning energy, in matters concerning humanity, is not only compelled by principles of fairness but is actually a practical necessity to solicit contribution from all stakeholders towards finding solutions.”