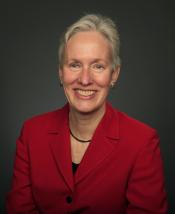 Sue Kelly has been president and CEO of the American Public Power Association (APPA) since April 2014.  Prior to becoming president and CEO, Kelly was APPA’s senior vice president, policy analysis and general counsel.  In that capacity, she helped APPA and its members in energy policy formulation and with policy advocacy before the Federal Energy Regulatory Commission (FERC), federal courts, and other governmental and industry policy forums.

From 1998–2004, Kelly was a principal with the Washington, D.C. law firm of Miller, Balis & O'Neil, P.C.  She represented cooperatively and publicly owned electric utilities and their trade associations, as well as other governmental entities, assisting them with restructuring-related issues before the FERC, federal appellate courts, and state public utility commissions.  From 1995–1998, Kelly served as the Senior Regulatory Counsel for the National Rural Electric Cooperative Association (NRECA). She represented NRECA before the FERC, state public utility commissions and courts, and served as a liaison from NRECA to many industry groups.

In March 2008 she was appointed to a one-year term on the U.S. Department of Energy’s Electricity Advisory Committee (EAC).  She served a second term on the EAC from June 2012 to April 2014.  In April 2010, Kelly was elected president of the Energy Bar Association.  In January 2015, she was selected to serve as an associate member on the Commodity Futures Trading Commission’s Energy and Environmental Markets Advisory Committee.  She is also a member of the E Source Advisory Board.

Kelly is a frequent speaker on energy-related topics.  She has given presentations to many industry groups, including the National Association of Regulatory Utility Commissioners, the Organization of PJM States, Inc., the National Association of State Utility Consumer Advocates, the Energy Bar Association, the American Bar Association, the American Antitrust Institute, the E Source Forum, and the Harvard Electricity Policy Group.  She has also appeared before federal and state administrative agencies, and testified before committees of the U.S. Congress and state legislatures.

Kelly was named one of Washington’s “Most Powerful Women” in the November 2015 issue of Washingtonian magazine in the “Business, Labor, and Lobbying” category.