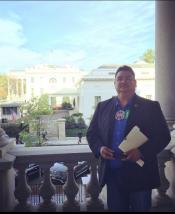 CJ is an enrolled Member of the Crow Nation, Member of the Big Lodge Clan and Child of the Greasy Mouth Clan.  He currently serves as the Crow Nation Energy Director. Prior to that, he worked in private practice as an Energy Consultant for Indian Energy Development and Infrastructure for five years. CJ currently serves as a Board Member and Co-Founder of the National Tribal Energy Association (NTEA). He was duly elected and served 2 terms (8 years) as a Senator in the Crow Legislative Branch. There, he served as Chairman of the Natural Resource Committee and the Infrastructure Development Committee for 8 years, through 2015. He was instrumental in the passage of Coal Development Deals, with Cloud Peak Energy for the Big Metal Mine and with Westmoreland Coal for Tract 1. After serving in the Crow Nation Legislature, CJ served as the Crow Nation Energy Advisor & Legislative Liaison in 2016.

CJ was previously appointed to serve on Congressman Ryan Zinke’s Natural Resource Advisory Committee for the 114th Congress. He was elected by the Natural Resource Advisory Committee to serve as the Vice Chairman in 2014.  In 2013 he was the first Native American to be appointed to and serve the Montana Coal Board, by Governor Steve Bullock, where he was elected and served as Vice Chairman.  In addition to all of this, CJ worked 10 years as a Coal Miner.

CJ and his wife Tara have been married 30 years and have 3 children, 2 daughters and 1 son, and 3 beautiful grandchildren.