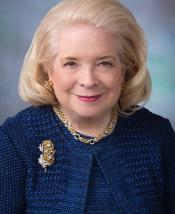 In her role, Ms. Hollis represents the broad interests of the U.S. energy industry and interacts with domestic and international leaders to advance knowledge and seek partnerships to develop and enhance energy infrastructure worldwide.

Prior to becoming Acting Executive Director, she served as the Association’s Chairman of the Board. She has served on the USEA Board of Directors for 15 years.

Sheila Slocum Hollis is also Of Counsel and Chair of the Duane Morris, LLP Washington, D.C. office, and was the office's founding managing partner, as well as the founding leader of the firm's Energy, Environment and Resources Practice Group. She served on the firm's Executive Committee and Partners Board for more than a decade.

Ms. Hollis practices in the areas of energy policy and, transactional and regulatory law worldwide. Over the course of her career, she has played a key role in the formation and implementation of energy law and policy in the United States and beyond. She began her energy law career as a trial lawyer at the Federal Power Commission and was the founding Director of the Office of Enforcement of the Federal Energy Regulatory Commission. For 20 years, she was adjunct professor at George Washington University Law School, teaching over 600 students energy law, and co-authored texts on energy law.

Sheila served as the first woman President of the Energy Bar Association, chaired the ABA’s Section of Environment, Energy and Resources and serves as its representative on the ABA Board of Governors. She also chaired the Federal Bar Association’s Energy and Environment Section and multiple other bar-related entities. Additionally, Sheila served Chair of the ABA’s Standing Committee on the Law Library of Congress in addition to other ABA leadership roles.

She has been the recipient of multiple honors and awards over her career. She was named one of Washington, D.C.'s Top 100 Lawyers overall and one of the Top 50 Women in Washington’s Super Lawyers. In addition, Ms. Hollis was recognized by the ABA as a “Trailblazer” for women in law, among only 100 women to be so honored for breaking barriers for women in cutting-edge areas of law. Ms. Hollis was ranked by The National Law Journal as one of the United States' top 20 energy lawyers and has received the highest possible rating from Martindale-Hubbell’s Peer Review Ratings for over 25 years for professional excellence. She is listed as a senior Statesman in Environmental law in Chambers was named one of the 50 Key Women in Energy Worldwide, and in 2011 was the first attorney in private practice to receive Platt's Global Energy Award for Lifetime Achievement and in 2018 was awarded the Lifetime Achievement Award by the London-based Petroleum Economist Publication. Widely published, she is a frequent commentator on environment and energy issues in media.

Ms. Hollis is a Trustee of the Center for American and International Law, a Life Fellow of the American Law Institute and Honorary North American member of the Commercial Bar of England and Wales. She was also elected to membership in the American College of Environmental Lawyers, an honor bestowed upon a select group of lawyers with “distinguished experience and high standards.” Ms. Hollis also serves as a Board Member of the American Friends of the Royal Society, a Trustee of Plimoth Plantation, and a member of the Sustainability Advisory Board of KB Homes. She served for a decade on the Board Institute for the Advancement of the American Legal System and is a Trustee of the Center for American International Law. Sheila was president of the Women’s Council on Energy and Environment and was awarded its Woman of the Year Award in 2003. Ms. Hollis is admitted to practice in the District of Columbia and Colorado. She is a Colorado native and a graduate of the University of Denver College of Law and the University of Colorado at Boulder, cum laude in general studies and with honors in Journalism.

Leading across the Energy Sector: Stories and takeaways from women who paved the way