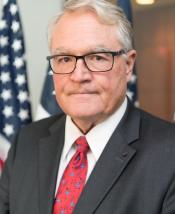 Mike Moore serves as a Program Director for USEA. He is also a managing partner of East-West Strategic Advisors, located in Washington, D.C. and focuses

In 2015, he was awarded the Royal Norwegian Order of Merit by HM King Harald V with the rank of Knight 1st Class and officer of the Order. His work related to CCUS/CCS, energy infrastructure, markets, and energy security were some of the positive attributes for Norway that contributed to the award, as well as involvement in Norway’s recognition of the sovereignty of the Navajo Nation.

De-Risking CCUS: Paving the Way for the Insurance and Finance Industries

Paving the Way to a Hydrogen Economy Part I

Carbon Capture in Colorado and the Southern Ute Indian Reservation